Last year we did an analysis of memory unsafety bugs in Apple’s iOS 12.x and macOS 10.14.x releases. We’re now at (nearly) the same point in the release cycle of iOS 13/macOS 10.15 so let’s run the numbers again1. If you’re interested in a deeper dive on what memory unsafety is and why it is Fish in a Barrel’s mission to rid the world of its scourge please read through last year’s post for the details. And, of course, follow @LazyFishBarrel on Twitter where we’ve been tweeting statistics about the proportion of memory unsafety related vulnerabilities in various software for over two years.

iOS 13 was released September 19, 2019 and has subsequently had a total of 15 feature and point releases. Unlike macOS, the iOS 13 series has several small bugfix releases that did not correct security issues. These are marked as N/A for bugs/CVEs but remain present in the list below.

It would be interesting to aggregate statistics across major versions, but we only have data for iOS 122 and 13. Let’s fix that by going back through Apple’s security docs and running the numbers for iOS 11 (we did not run the Fish in a Barrel Twitter account back then).

Let’s look at this aggregated for all of iOS 13 (with iOS 12 for a limited historical perspective).

To date, Apple has had substantially fewer bugs with a lower (although unlkely to be statistically significant) percentage of memory unsafety related issues. This, intriguingly, does not align with the general belief that iOS 13 is a buggier release, but security bugs and user-facing bugs (which are what create that sort of reputation) are not necessarily an overlapping set.

One interesting data point in these numbers is that 10.15.2 had the unusual distinction of having 27/32 memory unsafety vulnerabilities be in tcpdump alone.

Let’s run the macOS 10.13 (High Sierra) numbers as well so we have three generations of data available to us.

Since we conducted the macOS 10.13 analysis years after the fact the numbers include more third party libraries. Apple has a tendency to update their security notes weeks or even months later to include the CVEs of projects (like Apache, tcpdump, et cetera) that were not necessarily public when they shipped the updated version. In macOS 10.13.1, for example, tcpdump had 60 (!!) memory unsafety vulnerabilities.

Despite these limitations, let’s aggregate the data again.

The above statistics are for any code that ships with macOS or iOS (including the kernel), but what if we counted just kernel (and kernel extension) issues in macOS3?

The vast majority of kernel-related CVEs continue to be memory unsafety related.

Memory unsafety continues to dominate the total percentage of security bugs on Apple’s platforms. Engineers there should strenuously encourage management to prioritize migration of system daemons and other sensitive binaries to memory safe languages. Doing so would drastically cut the number of security vulnerabilities. Major investment should also be undertaken in determining how to migrate XNU itself. Moving kernel extensions to a C++ userland (via the system extension concept) will mitigate the severity of vulnerabilities in some cases, but is ultimately a poor substitute for a memory safe solution. As we noted last year, Ian Beer once said:

Apple creates robust security architectures, but their systematic under-investment in memory safety (and even some mitigations like pervasive fuzzing) remain a sore spot for 2020.

Need some swag to help convince your coworkers that memory unsafety is the real villain? You’re in luck! We just commissioned some artwork and you, the reader, can buy it! Check out the blog post and buy some for the C/C++ lover in your life. And always… 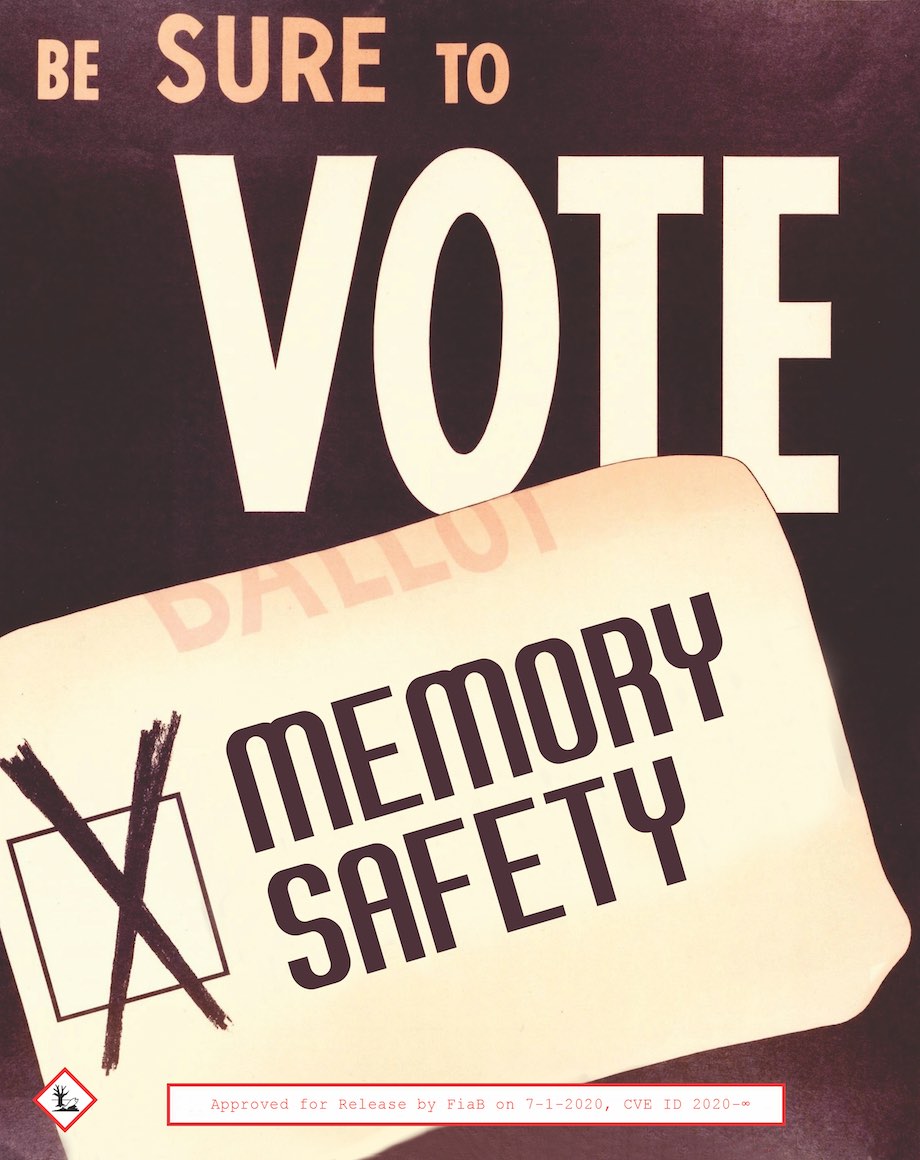